One of the best parts of this month was being able to share the cover for A Little Danger. I have to say that March has really kicked my ass in a big way. As I type this, I’m feeling almost as wiped out as I have ever been. I’m still very grateful for a lot of things this month. First, I’m happy that my sister’s back surgery was a success. Even though she’s experienced a few set backs, I’m thrilled with her physical recovery so far.

The icing on the successful-surgery cake was the cover reveal! The log line of this book might be my favorite one in the series:

I think the other thing that tickles me about this story is the title. Since this is the only novella in the Adrenaline Highs, it seemed apropos to call it “little.” Hence, you have A Little Danger. I know… I’m a goober.

Here’s the cover again just because I love to look at it. Haha. 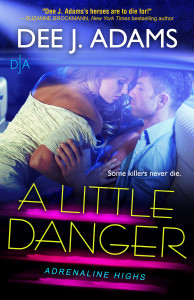 This is the blurb in case you missed it at the Not Your Usual Suspects Blog.

So that’s my happiness this month. A sister who is recovering from major back surgery and the cover reveal for A Little Danger! What’s your happiness?