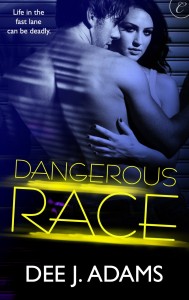 Click here to see what people are saying about Dangerous Race.

Power pulsed beneath Tracey Bradshaw’s legs, humming through every inch of her body like a well-loved song. She pressed on the clutch, shifted into high gear and the car screamed even faster.

A warm spring sun glowed over the cool track and made conditions flawless. A perfect day to prove herself.

She loved this. L-O-V-E. Loved it. It was why she’d been put on the planet and what she was born to do.

“What do you think, Trace? Not the same as the quarter midget tracks you raced on when you were seven, huh?” Uncle Joe’s voice in her ear sounded much as usual, the ever-overprotective father she never had and the all-knowing chief engineer he had always been.

“I think this one’s a little faster,” Tracey joked with a chuckle. “I like it better than the Brickyard too.” The Indianapolis Motor Speedway had been a blast, but this track rocked. “I’m feeling really good in the turns.”

She’d graduated from Indy cars to Arrow cars six months ago. She’d battled the stereotypical jokes and the inflated male egos. She was as good a driver as anyone else on the track. Hell, she was better. The best.

“What are you doing?” Joe asked as she zoomed past pit road. “I thought you were bringing it in. Over.” He could go from teddy bear to gruff lion and back again in the span of a heartbeat. Too bad she couldn’t adjust the volume on her earpiece. At the moment, he seemed especially loud.

“Not yet. I feel good today, Uncle Joe. Who knows? I might even break another record.” The lightly populated grandstands flew by in a blur. It would be a real rush when a screaming crowd filled the seats.

“For God’s sake, you’re only nineteen. You set three track records yesterday. Why don’t you save one or two for someone else?”

“I’ll think about it.” Pride swelled in her chest as a smile curved her lips. She’d been speeding her whole life. Didn’t really see a reason to stop.

Considering the American Racing Organization—ARO—had been around for thirty-two years, setting these records said something.

But Tracey had so much more to say.

“Damn it, Trace. Save it for race day. Come on in. Practice time is about done anyway.”

She whizzed past her pit again. “Two more. I have enough time for two more laps. Don’t fret.” She knew he hated that word. “I’ll go fast.”

“That’s what worries me,” he groused.

Tracey pictured Joe’s tan, deeply lined face. She could see his gray-peppered brows knit together as clearly as if he were next to her. She grinned to herself. “You worry too much, Uncle Joe.”

The line crackled with static. “One of us has to.”

Not her. She was on top of the world. She had everything she’d always wanted—a car in winning form and a man who loved her. The pieces of her life were finally coming together. Her future lay out in front of her. She’d never go back.

She focused on the road as she came up to turn four. “Almost done. One more,” she said into her mouthpiece. She barely heard Joe sigh as she came out of the chute.

Something caught her eye in the empty grandstands. It only took two milliseconds for it to register. Someone, a man, threw something over the protective fence. A red water balloon? Shit! Was he kidding? Water on the track at her speed was deadly.

The balloon splattered. Fear slammed into her like a semitruck at full speed. Blood drained from her head as sweat prickled her back. It wasn’t a water balloon. It was an oil balloon. The black mass splashed across the track…

Neil, her spotter, and Joe evidently saw it too. They boomed some very colorful language in unison. A regular cussing choir.

Tracey eased off the gas, going two-twenty. Braking at this speed was just as deadly as liquid on the track.

“Oh God,” she muttered. She swallowed back the panic as crewmembers swore loudly and violently over the headset, voices full of alarm. “I got it, Joe.” Tracey downshifted and steered away from the oil slick, careful not to overcompensate and throw herself into a roll, but her right tires sailed over it before she could slow down. Turn one came up…way too fast.

“I’m in control. I’m in control.” She chanted as much to herself as to Joe. Her heart hammered. Her palms sweated, soaking her gloves.

“Tracey!” The fear in Joe’s voice matched the fear racing through her veins. She was in trouble. He never called her Tracey. She’d been Trace since the day they’d met ten years ago.

She barely touched the brake.

The car slid and control slipped away. There was nothing she could do but ride it out and try to manage the crash. The world flew by. She gripped the wheel, her gloves stretched taut over her knuckles. But the wall came fast, and she took her hands off the wheel to keep from breaking her wrists. Oh shit…this was going to hurt.

Her car slammed into the wall broadside. Tracey’s low roar meshed with the crunching metal, a war cry to fight the fear that pounded through her as she took the ride of her life. Turning and turning and turning. End over end. The smell of burning rubber and the rush of air as her car flew apart.

The whole nose of her car split. Then white, hot, searing agony burned her left thigh. Her leg was being shredded. The excruciating tearing of flesh blinded her with pain.

Something slammed into her head, nearly ripping it off her shoulders. And still the car kept turning, the noise deafening.

Then it finally stopped.

She was still. Dazed. The sound of a spinning tire whirred in her head.

Something was wrong. She was upside down. The left-side straps of her five-point harness were stripped away. Hanging by the right side of her body, she looked down at the track, an inch from her face. A red puddle grew in front of her eyes and she searched for its origin. Blood streamed from her thigh like a grotesque fountain. She gagged at the sight of a fourteen-inch metal chunk lodged along the entire side of her thigh. Hot iron pain branded her.

She hadn’t planned to die this way. Not in the crumpled remains of her race car. She was supposed to have a long life with Eddie…maybe have a couple of kids. Even as the thoughts skittered through her head, she felt the blood drain from her body, knew her dreams would never come true.

“We gotcha, baby girl. We gotcha. Hang in there.” Uncle Joe was suddenly there, his voice low and calm.

Someone sliced the remaining restraints and she fell into Joe’s strong arms. He dished out orders the way he always did, but none of his words made sense to her. Sirens wailed in the distance.

Joe opened the visor of her Kevlar helmet. “Trace, can you hear me?”

She tried to focus. “I broke ’nother record,” she mumbled. Words wouldn’t form the way she wanted. A stab of pain rocketed from her leg and she arched her back to fight it.

“I’m th’ first…” she licked her dry lips, “…female t’ die at th’ track.” Joe spun in front of her eyes, turning over and over, just like her car.

“No way. Not here. Not today.” His words drifted farther away.

Someone took her helmet off. That wasn’t right. How could they pull it away from her face so easily?

“Stay with me Trace.”

Blackness closed around her and for the first time in her life she had no urge to fight. She welcomed the comfort with open arms, just as she would a long lost friend.