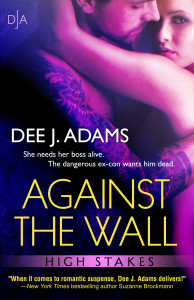 Countdown to Against the Wall

Read some reviews about Against The Wall.

Tanner Bryant wants revenge. After spending seven long years in prison for a crime he didn’t commit, he’s determined to even the score with the man who put him there. The only thing in his way is a slip of a girl in a big ass bind.

Jess St. John needs eight million dollars or her kidnapped family will die. Caught in a war between the mob and her boss, a corrupt film producer, she will stop at nothing to get the job done.

In a race against the clock, and a deal with the devil, Jess forms an unwilling partnership with Tanner to help find and free her family before it’s too late. In return, she’ll look the other way when her boss goes permanently missing. It soon becomes apparent that Tanner has more honor than he wants to admit and Jess finds herself falling for the gentle man beneath the rough exterior. But love and revenge run a close race and when push comes to shove, Tanner has to decide which one is more important.

The gun wobbled in Tanner Bryant’s hand as he wiped the sweat trickling in his eyes. His thudding heart drowned out the sound around him. All day, he’d been calm, and cool, exacting every move. Everything had gone as planned until now. The longer he waited on the rafters, the more his nerves frayed. Only a few house lights lit the large soundstage where a half built movie set waited to be finished, and darkness kept him hidden this high up. He’d heard some rustling a while back and caught sight of a giant rat scampering by on an adjacent beam. He’d seen bigger.

Dammit, he shouldn’t have taken so much time to learn Juneau’s schedule. All of a sudden the man had hired more bodyguards as if he knew Tanner wanted a piece of him.

Tanner focused on the scene twenty feet beneath him. He couldn’t hear what the girl was telling his target, but he didn’t care. Her gestures and position pissed him off. Thirty seconds ago, he’d had a clear shot, but now, little Miss Muffet stood in his way. She was just an itty-bitty thing, not tall, not wide, but he didn’t trust his aim and didn’t want to hurt her.

But he did want to hurt the man next to her. Desperately. He wanted Maurice Juneau to suffer. Painfully and for an extended period of time. Tanner didn’t need Juneau to know who had shot him. It just mattered that the man felt pain. Juneau was smart. He might actually figure out who pulled the trigger if he learned Tanner had been released from prison. Oddly, that thought did give Tanner a sense of power. The pond scum had ruined Tanner’s life and it was only fair that Juneau knew it was him.

But, it wasn’t a prerequisite.

Tanner shifted on the catwalk. Three minutes ago, his whole body ached from being in the same position for so long. He’d gotten on the studio lot by hiding in the back of flatbed truck loaded with sets. Hiding under a black tarp had been easier than he’d expected. Waiting for Juneau had scraped his nerves raw, but now that he had the man in his sight, all his aches faded. The bastard had aged in seven years. The gray in his hair proved it.

But no. Instead he had a little wisp of a she-thing gesturing and flailing, trying her damnedest to get Juneau’s attention. The asshole had been on the phone almost from the minute he walked onto the stage with the girl at his heels like a frantic puppy. Almost as if she knew Tanner was about to strike and wanted to save the black-hearted son of a bitch. That was impossible. Tanner had never seen her before. Didn’t know who the hell she was. His nerves were finally getting the better of him if he thought anyone knew he was here at all, much less what he was doing.

Juneau’s small office staff was supposed to be gone. He was supposed to have wrapped his last film and sent everyone off for a couple days of R & R, so who the hell was this girl?

She edged left and Tanner adjusted his aim, and just as quickly she moved right.

She moved left again and this time Tanner pulled the trigger. He felt the kick of the Glock in his hand at the same time a Town Car entered the huge elephant doors of the stage. The shot rang out and Juneau ducked. Fuck. He missed. The girl jumped a mile and spun around.

But Juneau ran and Tanner kept firing, nearly choking on the taste of failure. The car door opened and the bastard dove in, leaving the girl in the dust as she sprinted after the speeding black car.

Scrambling down the wall ladder, Tanner already set his sights for the next opportunity as he ran for the door. He may have missed this time, but Juneau wouldn’t be lucky forever. A last glance over his shoulder froze him. His heart beat frantically, screamed for him to run. The girl had stopped and moonlight shining from the doors illuminated her silhouette and white T-shirt. A white T-shirt that was quickly turning red as blood ate up the cotton from the top of her shoulder. His stomach lurched.

Holy shit, he hadn’t missed after all. He’d shot her.