November! How did it happen so fast? Only one more Hollywood story for 2015. That is just craziness! So…

This story goes way, way back to my second Halloween in Hollywood. It’s not so much about something that happened while on set as it is about life in this city in general. Especially when it comes to this specific “holiday.”

I was (freshly) twenty and still learning about all things Hollywood, including the Halloween parade that goes down (you guessed it…) Hollywood Blvd every year. I was working at KTTV (channel 11), also known as Metromedia in those days. (It’s where most of Norman Lear shows were taped and where Joan Rivers and Arsenio Hall did the Late Show.) I’d only been working there a couple of months and I knew my route to get home and to get to my boyfriend’s house. (He’s now my hubby, BTW.) I hadn’t yet explored too much on my own and when I was with my guy, he did the driving so I didn’t really pay too much attention.

On this particular October 31st, we were leaving work and heading to his place about fifteen miles away. The sun was going down and I had no idea that a yearly parade even existed. Sean and I were in our separate cars having come from our respective homes that day so I guess he expected me to follow him out of the studio. He turned right and I had no clue why. We had to turn left to go home.

You how you DON’T KNOW WHAT YOU DON’T KNOW? Yeah. I didn’t know about the damn parade or that there would be gridlock traffic. Sean either knew or had been warned and he went an alternate route – avoiding the parade. So there I am in my tiny VW Rabbit sitting in standstill traffic trying to cross Hollywood Blvd to get to the freeway. The closer I got to the street, the more freaky costumes I saw walk by. I’m talking scary shit, people. The bloody, gory, grotesque zombie stuff that Halloween fanatics love. It’s not that I hated Halloween, I was just never really into it. Probably because my mom never made a big deal about it. (All our costumes growing up were something culled from the closet or made ourselves so we never did anything elaborate. But back to the story…)

At about the thirty-five minute mark I was still a few cars away from the light, wondering at this point if I’d EVER see home or my boyfriend again. Five very large, very scary men dressed in black with varying degrees of blood splashed on their dark clothes wearing the scariest masks you’ve ever seen descended on my car. And I mean descended as in the closer they got the more nervous I got. They didn’t just walk by. Oh no. These assholes (and I use the term loosely) decided it would be really cool to scare the crap out of a young lady all alone in her small car. They literally POUNCED on my car. Two on the hood, one on the roof and one on either side of the car. They pounded–HARD–on all the windows, screaming and hollering and scaring the living hell out of me. I was surprised the windows didn’t break. I certainly expected them too. I was screaming too. Laying my hands on the horn, trying to catch someone’s – ANYONE’S – attention for help. I don’t even think my horn could be heard over their pounding and screaming. I was literally alone in the middle of one of the most crowded places I’d ever been, waiting, KNOWING, these men were going to pull me out of my car and tear me apart limb by limb.

They must have pounded for at least two minutes. I’m honestly not sure, but I can tell you it felt like an eternity. They finally got tired of the thrill and moved on down the street, laughing and enjoying themselves. (Body language proved it.) I will be honest and say it was a freaking miracle that I didn’t have a coronary or a stroke or simply pass out. I’m not kidding either. I’ve been known to pass out when I’m surprised. (I once passed out when I was a teenager when 2 of the neighborhood boys jumped out from behind a car as I was walking to my front door. Not only did I drop all the books in my hand, but I dropped to the ground like a brick. Out cold.) I never go to scary movies and since that Hollywood parade, I avoid all things Halloween. Oh sure, I’ll hand out candy, but that’s about it. Anyone who knows me well will tell you that if you scare me, it’s the sure fire way to piss me off. It’s probably my number one pet peeve.

Anyway, the guys moved on down the road and I think I probably burst into tears. I honestly don’t remember. (I tend to block out the real shitty things that have happened in my life.) I know I was shaking like a leaf in a wind storm! I don’t know that I’ve ever been that frightened for my life ever before. (Side note: If you’re into all that scary stuff or just people watching then you need to visit the Hollywood Halloween parade at least once in your life. Me…? I stay as far away as humanly possible!!)

I will say that this year I got caught in the work trap and ended up “dressing up” for work with my friend Bonnie. As you see below, we kept it pretty simple… okay, extremely simple! Can you guess what we are? 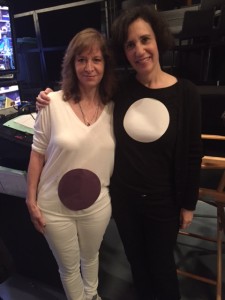 You may have figured it out… Yin-Yang. Silly, but fun.

Oh… and to finish the story. It took me over an hour to go a mile and a half to the freeway. Then it took less than a half hour to get to my boyfriend’s house. That’s 90 minutes for 15 miles. He thought I knew about the parade and thought I was going to follow him. Ha. Didn’t I wish! I broke down in tears retelling him the story and I remember him holding me and calming me down. (I also remember thinking: Note to self. Marry this man.)

What about you? Any crazy Halloween stories?