I thought I’d tell you a little about one of my early -might even be my FIRST- on camera experience.

I think many people realize that luck and timing have a lot to do with working in Hollywood. Take for instance a costume. If the wardrobe department has a costume already designed and built, the actor that’s hired for the job has to fit in it. Makes sense, right? But what if the actor who is really good and best for the part doesn’t fit into the wardrobe? Well… in most cases, that actor won’t get the job.

I mentioned last week how I worked on Hour Magazine and my first on camera experience happened there. The host, Gary Collins, was one of the nicest guys I’d ever met. Here’s a pic of Gary the way I remember him from the show. 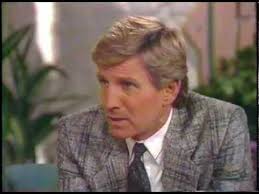 He often had people on the show who promoted new items coming on the market. Anything from gadgets to electronics to sports equipment to food. On this particular day, they had a pair of roller blades. Possibly the very beginning of the roller blade phase. Someone – not sure if it was Gary or one of the producers – thought it would be more fun to show someone actually skating than to just hold up the skates and talk about them. Since this was a last minute decision, they scrambled to find someone who could fit into the size 6 skates.

Well, there I am in my page uniform, a gray polyester skirt and navy blazer with a white top, watching people running around trying to find someone, so I mentioned that I happened to be a size 6 and I was really good at skating. (Of course, I’d never roller bladed before, but I figured, how tough could it be?) When the Powers That Be discovered they’d found someone to fit into the skates, it was just a matter of wardrobe since I couldn’t do the piece in my uniform. At this point, I was getting kind of excited that they might actually USE ME, but I didn’t think they really would. It didn’t take long to find out that, yes, I was the girl who would skate by to promote the blades, as long as I had the right clothes. I ended up changing into my street clothes, a pair of skinny jeans (isn’t it nice they’ve come back in style. Haha.) and a sweater.

I remember lacing up the skates backstage and standing up. This terrible fear washed over me as I realized, I might not be able to actually skate! And without a proper downhill to get going, I didn’t have any speed so I looked more like a cross country skier than a skater. But nevertheless, the time came to go on camera. I was just supposed to skate in front of the Gary (and Sandie Newton – she introduced whatever items were talked about that day) just to model them. My mouth was parch dry and my heart beat like a crazy drum. Since I’d never been on camera before and I didn’t want to block Gary or Sandie, I stayed really low as I skated by. Gary made a joke about how I looked like Ruth Buzzi (look her up. LOL.) and the audience got a kick out of it. At the end of the segment, the producers decided to PUSH me out for another “roll by” (as a sort of end to the piece) and this time I had much more speed. But instead of looking out to the camera, I looked toward Gary and Sandie and waved my arms as I rolled by, but the audience only saw my back. Like I said, it was my first camera experience. I never again gave the audience my back.

So what about you? Did you do something as a first and learn from it? Were you embarrassed or did it take the experience with a grain of salt? I’d love to know!