This months’ Hollywood story is one of my more embarrassing moments, but I figure I should come clean since… well… why not. No one will care. LOL.

I first got my foot in the (Hollywood) door working as a Page at KTTV. (Channel 11.) Back then we were known as Metro Media and there were a ton shows taping on our lot. One of my first jobs was working on Hour Magazine hosted by the late – and very wonderful – Gary Collins. One of my duties was to greet the guests for that day’s taping, show them to their dressing room and make sure they had everything they needed. (That usually involved a towel in case they wanted to wash off the make-up when they finished taping. We taped one show a day and there were anywhere from 3 to 5 guests per show. Depended on the show.)

Since I’d only been in California for just over a year at that point, I was still easily star-struck so everyday was an adventure on who I was going to meet and greet. I’d get the show guest list every day when I came on duty and be so excited to see who was on it.

I have to preface this next part by telling you that I grew up in a tennis family. My brother played professionally and toured in Europe for a while. My parents belonged to the tennis club and my mom played a couple of times a week with her “bunch.” I also played for a few years until I discovered it really wasn’t my thing. (I liked running better.) My point is, when you’re in a tennis family, you also watch it on TV and you know all the players.

On this particular day at work, Pam Shriver was one of the guests and I was so excited that I was going to meet her! She was a household name for me growing up. The thing about greeting guests is sometimes they don’t exactly come at the time on the call sheet. I had just taken a guest to their dressing room and had stopped in the audience for some reason I don’t remember. Someone tapped me on the shoulder and I turned around. I nearly quit breathing. It was HER! My eyes bugged open and I said, “You’re Pam Shriver!” She said, “Um, yes. I am. I was wondering if you could tell me where to go.” 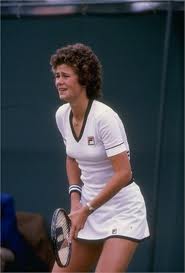 (This was Pam in those days.)

Could I ever!! That was my job! And of course, by now I’m feeling like an idiot because I blurted out her name like that. (Yes, dumbsh*t, she knows her name!) But she was very nice as I led the way to her dressing room and babbled on about how terrific she was. Ugh. How embarrassing. I’ve had a few of those in my day. Maybe I’ll give you another one of those next time too. Or not. I can only out myself so much. LOL.

What about you? Any really embarrassing moments that you wanted to just crawl under a rug and disappear? It would be nice if you shared, so I’m not out here…alone…by myself…embarrassed. <G>

Oh! Before I forget! Today is the first day of the Against The Wall giveaway at Goodreads! Check it out!