I’ve got a great story for you this month although I have to admit it’s not mine, but it’s too good NOT to tell.

This incident happened about 28 years ago at ABC. My husband was working on a pilot and had been told that a certain dressing room (located with the other dressing rooms for his cast) was off limits to everyone in the show. Period. No one could use it. Apparently the room had been remodeled for a very famous singer — we’ll call her Polly — while she shot a show on the same stage and it was much larger with a lot of amenities. (Let’s just call it a hot tub! And, no, sadly it isn’t this hot tub, although I wouldn’t mind taking a few minutes to relax in this sucker… but I digress.) 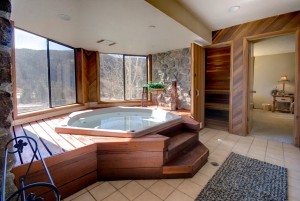 They get to the end of shoot night and the 2nd assistant director is looking for the three “pretty girls” cast in the show for their scene. Many of the other actors have already been let go. The poor AD can’t find them anywhere. On a whim, he knocks on the “off limits” dressing room when he hears some giggling. He knocks again and everything goes quiet. Being the smart man he is, he unlocks the door and goes in. Who does he find? His three missing “pretty girls.” What are they doing? They’re in the hot tub with one of the male leads of the show, let’s call him Morry. How did they get there? Apparently the dressing room adjoined to Morry’s dressing room and he picked the lock and had been using the “off limits” room for who knows how long.

So, here’s what you have: Three actresses who have taken off their wardrobe and jumped into a hot tub in their underwear… before they’ve finished shooting their scenes. Their hair and makeup has to be redone. This is going to be a problem time-wise since the director is already needing them on set.

The AD rushes them out of the room and lifts his hands at Morry (who hasn’t moved from the hot tub) in a WTF gesture. Morry just stays in his hot tub, smiles and says nothing. Do you know this actor? Some of you might, but he’s more of a character actor. You will definitely know his brother. They are part of an “acting family” for lack of a better description.

You’re welcome to make guesses and you have lots to guess at. Who is Polly? And who is Morry? The only clues I’ll give you are these. She is a country star and he has three names in his full name. Guess away! I can’t guarantee I’ll confirm, but it will be fun trying!