How can it be October 1st? Seems crazy! But a new first means a new Hollywood story.

I’ve kept this one to myself for many reasons. The biggest being that I was just too embarrassed to put it out there, but I told it to a friend the other night and she laughed so hard she couldn’t breathe. Granted, that could’ve been the margaritas making her loopy, but it’s still a good story despite having to out myself.

You may remember when I told a story about standing in for Bette Midler for the second VH1 Honors. Well, in between my dialogue coach jobs, I stood in on a lot of variety shows, including the Oscars. I think I worked the Academy Awards for about 10 years give or take a year.

I’ll admit I mostly had a good time rehearsing the shows. It was always fun knowing who would be presenting and what they were going to say. Sometimes we got to hear the opening monologue and sometimes we didn’t. It all depended on who was hosting and how well they trusted us (the crew) to keep quiet. Stand-ins at the Oscars have the job of rehearsing all the presenters’ lines and the recipients’ speeches. If you’re a presenter, you read from the teleprompter and if you win an award you have to go up to the stage and ad lib a speech until the prompter tells you to “wrap it up.” I don’t remember how much time we had for a speech but I’d guess about a minute. (Let me tell you… when you’re ad libbing a speech, a minute can be an eternity!)

One year in particular, I was a nominee in the sound editing category. (Usually we had anywhere from a dozen to 2 dozen assignments for the night. It all depended on how many people were scheduled to work. We might present one award and be in the audience as a nominee for a different award.) I just remember this one particular show that Mike Myers was a presenter. Now anytime you were a nominee, it meant that if you won during the one rehearsal where the real presenter attended, that person was going to hand you an Oscar (a stand-in Oscar since the real thing didn’t come out until the show) and you had to make a speech with that celebrity standing next to you. Kinda fun, right?

Before this particular rehearsal (with Mike) happened, the crew gathered in the audience for a meeting. Apparently, Mike wasn’t the only one presenting the award this year. Oh no, this year, Mike was going to be handed the envelope by Bart the bear. Yes. A real live who-knows-how-many-hundreds-of-pounds-he-weighs bear. Okay. That news sinks in. In general when working with animals you have to be quiet on set because you don’t want to distract them or – you know depending on their size – rile them up so they kill you. Click here for the Mike & Bart clip. 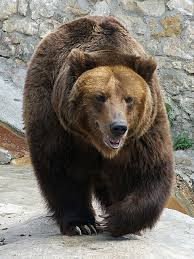 So the bear guy comes out and gets our attention. “Hi, just want to talk about a few safety issues.” Yada, yada. Then this: “If any of you women have your period, you should probably leave the room because the bear will smell you.” Pause. Then he went on to say how that probably wouldn’t be a good thing. Okay, so I don’t know what all the women in the place are thinking, but I’m thinking this: Hm. I’m just at the END of that time of the month. Does that count? Will the bear smell me? Will he attack me if he DOES smell me? And this: If I get up and walk out now, the whole freaking crew knows I have my period. WTF? Really? Not to mention the fact that I’ve been scheduled for this slot. Switching with someone can throw off the schedule depending on where everyone has to go next. So what did I do? I sat quietly in my seat and decided I wouldn’t get picked to win and I didn’t smell enough for the bear to want me. (C’mon… I showered that morning. If anything I smelled like hair spray.)

On to the rehearsal. Mike lists the nominees, takes the envelope from the bear who is standing in his little circle on stage (while we pray he remains in his little circle since there’s nothing keeping him there but the promise of a tasty morsel if he does his job) then proceeds to call the winner. I couldn’t tell you the winner’s name. I only knew it was me. Yep. I won. Yippee. I’d get to be handed an Oscar from Mike Myers while on stage with a bear who was now definitely going to be close enough to smell me. Oh joy.

Yes, I’m thinking all that as I trot onstage, wondering what the hell I’m going to say as I ad lib my speech and hope that the bear doesn’t pounce on me from behind.

And what happens when I try and take the award from Mike? He pulls it back. Haha. Give me the award, Mike! He laughs, offers it again and I reach for it – again. And he pulls it back. Again. Seriously? Granted, Mike doesn’t know my life is on the line. I’m the only one in the room who realizes this which is why I want the hell off that stage. So I begin my speech – talking really fast in hopes that it will speed up the clock if I talk faster. It didn’t. It just meant I had to come up with more to say since I had to fill the time. Mike shoved the award at me again and this time I didn’t even try to take it. I was already embarrassed enough as it was. I don’t remember much besides looking over my shoulder most of the time to make sure the bear wasn’t sniffing the air and setting his sights on me.

Long story short – okay not really, but I tried – I walked (very quickly) off stage with Mike behind me. I couldn’t tell you if he tried to hand me the award again because I was too busy running from the bear.

That’s my story. I never met up with Mike after that. Or the bear, thankfully.

How about you? Any fun animal stories you can share?