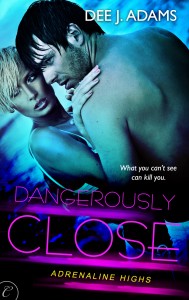 Dangerously Close is the second place winner of the JABBIC contest in both the Grand Prize and Reader’s Choice categories! And it’s a finalist in The 2013 Gayle Wilson Award of Excellence!

See what reviewers have said about Dangerously Close.

The blow dryer came to life and a shiver spread through Ashley as Mel ran his hands through her hair and warm air heated her head.

“Are you still cold?” he asked.

She shook her head, her eyes closed. “No, it just feels good. Your hands and the heat.” She reveled in the sensations, in the slight tug on her scalp. Not so long ago, she’d been sure she’d never be warm again. Hell, she didn’t think she’d live through the night. Considering she should’ve been a dead woman, this was a nice turn of events. Mel’s fingers combed through her hair again and another shiver ran through her.

“I can’t help it.” She laughed. She couldn’t believe she was laughing. Dead people didn’t laugh. That thought sobered her pretty damn fast. She focused on his hands, his palm against her head and the heat from the dryer. Her blood raced through her veins and tingles shimmied down her spine.

“You want to tell me what happened?” he asked.

Ashley described the events, from hearing the door slam, to realizing Roamer wasn’t in the house, to going out after him. “I don’t know how or why, but the railing gave way. I jerked back, but slipped and ended up tumbling over with it.” Her voice dropped to a near whisper. “I thought that was it, you know? I thought the whole thing was going down, but I held on anyway.” She shivered, the memory fresh in her head.

The dryer shut off and Mel crouched in front of her, his hands on her thighs. “How long were you holding on before I got there?” His voice sounded soft and a little husky. Kind of sexy.

Shrugging, she shook her head. “I don’t know. It felt like hours.” Tears stung her eyes, but she fought them back. “It was probably more like five or ten minutes. Enough to freeze my arms.” God, they still ached. And her hands stung like a bitch.

Mel pulled her close. He’d trapped her arms in the hug, which was just as well, because she didn’t have the strength to hug him back. Instead, she took a deep breath with her head tucked into his neck. He smelled so good and the short stubble on his cheek rasped against her temple. She always forgot he shaved when he worked.

Too quickly, he pulled away. “Let me see your hands,” he said. His warm, strong fingers opened her hand. “Shit. This might take a few minutes. No wonder you hurt.” He reached for something on the counter—tweezers—and painstakingly removed all the splinters from her fingers and palms. He coated the nastier scrapes with antibiotic ointment and bandaged her hands.

“C’mon,” he whispered. Before she had a second to answer, he lifted her and carried her out of the bathroom. Next, he laid her on a bed. His bed. In his room. She knew that because the tub had been in her dream bathroom. The one in his bedroom.

“What are you doing? I should go home.” But he was covering her with warm blankets.

“Fuck that. You’re staying here.” The blankets tightened around her as he tucked her in. Flannel. God, they were so warm.

She chuckled. She hadn’t seen the caveman side to him before. That was sexy too. “Is that the new twenty-first century way of inviting someone over? ‘Fuck that, you’re staying here.’ I might have to try it some time.” A few awkward seconds passed and she sensed he didn’t find her funny. She lost the smile.

He sat next to her and Ashley imagined the serious expression on his face. “No,” he said. His warm palm stroked her jaw as his thumb grazed her cheek. His voice had that husky quality again and her insides started a slow melt. “It’s my way of making sure you’re okay the rest of tonight. I want you close to me.”

Ashley’s breath hitched. The contact, the words and the way he said them were electric. Maybe she was too wigged out from tonight. Maybe all of it was in her head, but it didn’t change the way her body felt. A definite hunger slowly built from her center and fanned out to her fingers and toes. She didn’t move. She couldn’t. She sat there frozen, waiting for more of his touch, more of his heat.

“I’d better get to Roamer,” he said. But he didn’t budge. Except for the destructive stroke of his thumb against her cheek. “Go to sleep, okay?”

She wanted to say, no, that she’d rather kiss him instead, that after a night like tonight, she wanted to live. She’d always wanted to live. But the way her insides hummed, the adrenaline that had pumped through her system must have jump-started her dormant body.

He leaned forward. The blankets tightened around her lap. Ashley held her breath, waited for his kiss, but when it came, it wasn’t what she expected. His lips brushed her cheek, lingered for only a moment and his rough stubble rubbed her skin before he pulled back. The disappointment crushed her. But she’d told him in the beginning they could only be friends. And they had been the best of friends. She trusted him and he knew it. He was being a friend right now by taking care of her and he hadn’t crossed any lines.

There must be lines. From friend to lover was not really a big leap for her, but it always changed things and Ashley liked the way they were.

“I’ll be right back.” His hand dropped from her face and he left her in the big warm bed. She heard him in the bathroom talking to Roamer as the hair dryer hummed. He’d probably been right not to kiss her. Not that she even knew if he wanted to, but even if he had, they were better off this way. As friends. She wasn’t in high school anymore. Relationships changed when sex added into the mix and she liked what they had too much to screw it up.

After snuggling into the covers, she closed her eyes and let the warmth of the flannel sheets lull her to sleep.