Now, keeping in mind that I have nothing against 2016, it kind of started off a little rough for me. You may have realized that I never posted a Hollywood story on January 1st and I also missed a blog at Not Your Usual Suspects where I usually have a post every few months or so. Nope, I missed it all because my computer had a heart attack. (I know, it didn’t really have a heart attack, but it did require ICU.) Thankfully, I got it back just in time for this blog.

The other rough spot of my year so far was coming down with a stomach bug that put me down for a few days. Ugh. Nothing much worse than dealing with severe stomach cramps…unless, say, you give yourself third degree burns on the roof of your mouth eating hot chilies. Yes, it happened. Please, don’t ask. Let’s just say I’ll never make THAT mistake again.

On the bright side, it’s January 10th and my computer is fixed and my health is good. Yay.

Because life is pretty ho-hum, I thought I’d post a picture of my new front door. I’m thinking of it as the new gateway for awesome things to happen in life. What the hell, right? 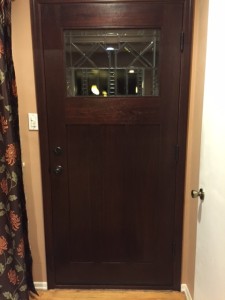 Not bad, yes? Apparently the only thing holding the old door together was the paint. It’s a little hard to see, but this craftsman style is my favorite. It’s changed the whole feel of the house.

I’m looking forward to the rest of this year with hopeful anticipation. That’s due in part to the fact that I made no New Year’s resolutions that I might break in the first two weeks of making them. LOL. I know myself too well.

What about you? Any new year’s resolutions that you’ve kept and/or broken so far?