I hope everyone is rolling into the Holidays in good spirit! I know I’m having a hell of time! (And I mean that in a good way!) I have so much to be grateful for including two releases. First, I am beyond thrilled to bring you Over the Top in just 2 days! Look for it December 22nd!

This is a prequel novella to Against the Wall and it’s definitely much shorter than my usual length when it comes to romantic suspense. But I’m hoping it will tide you over for a little while until my next release in 2015. The best part is it’s only 99 cents! Here’s the blurb:

And don’t forget Eight Nights with a Hero! Cold Nights, Hot Heroes and Eight Deadly Secrets! This is eight novels and novellas including NYT and USA Today Bestselling Authors! Grab your copy now for only 99 cents before it’s gone! 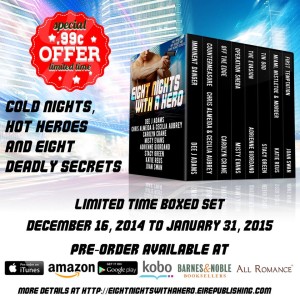 Just imagine, for almost $2.00 you’re getting 9 books! Treat yourself to some fun romantic suspense!

Here’s a wonderful season of peace and joy and very Happy New Year to you all!

Tell me your happiness this month!