This months Hollywood story is fairly recent. It took place last year on the show I’m currently on. Our lead actors are crazy talented. They act, sing, dance and even do many of their own stunts. They used to do more until an accident on set. You can bet that any time the paramedics are called, it means things will change. Wait, I’m getting ahead of myself.

Let me preface by saying that nearly every episode is like shooting a mini feature film (every week). We are constantly shooting stunts, visual effects and special effects. You’d never know that watching our little 30 minute show just how many hours goes into making the finished product.

On this particular episode, the actors had rehearsed a fight scene all week and it looked fantastic. They were flipping, kicking and throwing punches like nobodies business. Even though we had stunt doubles standing by, it wasn’t very clear if they’d be doing any of the fight scene because the actors were athletic enough to pull it off. Below is a shot of those stunt punches. You can see on their faces how focused and into the scene both actors are. 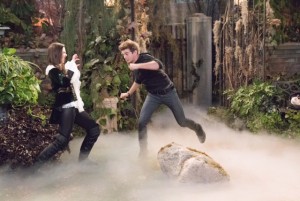 Cut to shoot day. The actors are in their wardrobe for the first time. The lights are up, the cameras are rolling. We got through different segments of the fight scene and everything was going great. Then we got to a tricky part of the fight. Jack (who plays Max), had to perform a high kick that Kira (who plays Phoebe) had to duck. All week long they performed the move without a problem, completely impressing all of us. Well, this time, things didn’t quite go as planned. A combination of things happened to change the circumstances. One was wardrobe. Jack’s pants weren’t the loose fitting sweats and light sneakers he’d been rehearsing in. He was wearing skinny jeans and hefty boots. Also, we were shooting this fight scene at the end of the day so count fatigue as a small factor as well. (The actors had been in since early morning and already put in a full day.) Basically, Jacks booted heel connected with Kira’s head. We all heard the thump. We all gasped. Jack immediately ran to her. He knew she was hurt. Kira stood there for a second before backing up and sitting on the rock you see in the picture. Actually… I’ll just show you. 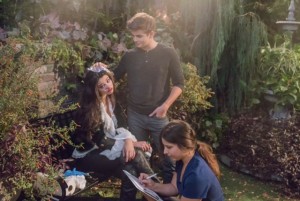 No one felt worse than Jack and he stayed by Kira’s side the rest of the day and into the night when they went to the hospital for stitches. If you look closely enough, you can see the blood on her white pirate shirt. Ugh. Poor kid. What a day. Needless to say, their stunts are limited now, although they still do a few things. Kids are definitely resilient!

Kira healed just fine, although the scar on her head is sensitive to weather changes. Haha. And she showed up to work the next day and worked all day long with stitches in her head. You know what they say… the show must go on. Show business is relentless that way.

How about you? Ever had to work through the pain?