I think most people know that as glamorous as show business seems, it’s really a ton of hard work for everyone involved. Take for instance my day yesterday. 14.5 hours. Yep. If you include the commute, you can tack on another hour. From the cast to the crew, no one gets off easy. The hours can be brutal, especially when you’re working on a show that deals with special effects or visual effects and stunts. Oh and the occasional crazy makeup and wardrobe issues. Add in shows that are written “big” and you’re left with a long work week.

Because we work so many hours, the producers in charge are very sweet about trying to ease the pain. They tend to bring in coffee trucks on our longest work days. Sometimes the writers of the current episode will bring in an ice cream truck, or like this past week, a churro truck! Yes, you heard me right. We had a churro truck this week. (Yes, they were delicious!) Although I failed to get a pic of the churro, I did take a couple of bad pics near the end of tonight’s show. As you can see, my pics are pretty bad, but I just wanted to give you a taste (pun intended) of what one of the tables looks like. 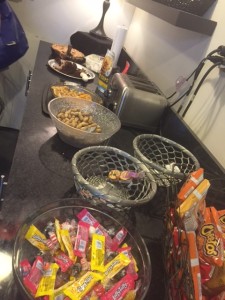 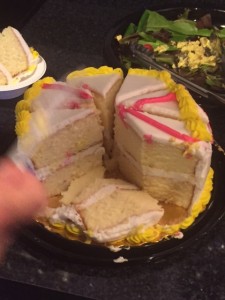 On the far end of the table is a pie and what’s left of a decadent chocolate cake. The next pic is cake we used for the show. (We had about 5 of them and this was the one not used in the shot.)

So, I’m going to see if I can remember all the fun perks from a few of my last shows. Here it goes in order of what I remember most by the frequency of the times I’ve had it and a little description of what we got:

Coffee truck – pretty self explanatory. They serve coffee, teas and sometimes smoothies depending on the company.

Ice cream truck – also self explanatory. They serve anything from soft serve to ice cream (in cones or cups), to smoothies or even sandwiched between cookies.

Crepe truck – one of my favorites. They usually serve a choice of several. My favorite is the apple/cinnamon crepe.

Fruit truck – Yep. Just like it sounds. Your choice of fruit and it’s usually topped with lime and a sprinkle of hot pepper.

Churro truck – I was new to churros until this year. Had never tried one. It’s like a cinnamon doughnut. Yummy bad-for-you goodness.

I know we’ve had more, but I just can’t seem to think of them at the moment.

How about you? Ever had a never-ending job?