In this month’s Hollywood story I have to change the name to protect the idiot. (I say idiot, since the star in question is not innocent at all. LOL.) I always feel weird telling stories that don’t put people in a good light simply because I’m not fan of negativity. It doesn’t mean the town isn’t full of it, but it also doesn’t mean I have to spread it around. Still, idiots do populate show business and their bad behavior could be called out and they have no one to blame but themselves.

Now, with that said, I won’t “out” this actor, but I will tell you a story about him. (And yes, the “him” is the only hint you’ll get along with the show he guest starred on.)

I was working on Still Standing and my husband happened to be working on Rodney on the very next stage. I discovered that one of my favorite actors from one of my favorite TV shows was going to be guest-starring on my hubby’s show and I was SO excited. I knew I’d get to meet him. He’d been on a hit show many years before and he was a gorgeous man, so what’s not to be excited about, right?

Here’s a pic of the Rodney cast. I loved them. They were very good to me and my hubby. 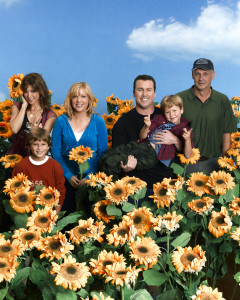 I was supposed to go on set during my lunch hour to meet this actor, but before the big day, I discovered he’d been treating my husband – who at the time worked as the First Assistant Director – like crap. Really? That kind of burned me. I thought, hey, maybe he had a bad day and would get nicer. People have bad days all the time and I try to give them some slack, because you just never know what they are dealing with in their life. But then the next day, this actor was still being a real PITA to my husband. Two strikes… he’s out.

One of the crew members had mentioned to this actor that I was a huge fan and pointed me out to him when I came on set. But that was when I discovered what a jackass he’d been to my husband. So instead of walking up to him – which I would’ve done in a second, because I’d learned to be brave like that after so many years, I just hung out by my hubby instead.

This crew member – who will remain nameless – just because she likes her privacy – said, “You can’t not say hi to him! I already told him you want to meet him!”

Tough tacos. Not my problem. I really didn’t care at that point. (I hadn’t asked her to say anything and it shouldn’t have been an issue for her.)

Here’s the funny part. As I was leaving to go back to my set, I neared the stage door and this actor appeared out of nowhere to open the door for me. I’m serious. The door I choose was behind huge empty bleachers (where the audience sat on show night) and this guy had no reason to be back there. He had to have been keeping an eye for me waiting for me to oogle him and when I didn’t, he found a way to approach me. I suspect he needed his daily ego feed.

So, he smiles wide and opens the door for me. “Thanks,” I said, and walked out without another word. Nothing. I could see the surprise in his face. Truly, it was priceless.

Now, here’s the funnier part. the NEXT DAY, I’m walking back to my car after rehearsal and walking past my husband’s stage which is across from the actors’ dressing rooms for our two stages. Out of the blue, this actor appears from behind a trailer, hits me with his gorgeous smile and says, “Hi, there. Beautiful day today, isn’t it?”

First, I was shocked to see him because he is gorgeous and crushes are hard to crush when you have them, but I kept my cool and replied. “Yes,” I said. “I love California weather.” And I didn’t say another word. Just kept right on walking. I left him standing there in the road by himself and I could feel his eyes on me as I walked away.

I took terrible satisfaction in my actions. Knowing he’d been hoping for me to tell him how much I loved him and what a fan I was of him and his show and that I didn’t give him what he wanted/craved, I felt as if I’d knocked him off his pedestal. Probably not for long, but it was my little <insert middle finger here> to the guy who treated my man like crap.

What goes around comes around. Most especially in Hollywood. It’s a small town. But I’m always sad when someone I loved watching, who makes me laugh (or swoon) turns out to be a real heel.

Now… you guys are free to guess who I might be talking about, but I can’t guarantee that I’ll say you’re right.

What about you? Ever had preconceived notions about someone then learned the hard way that they aren’t what you hoped they be? Let me know! I’d love your story.