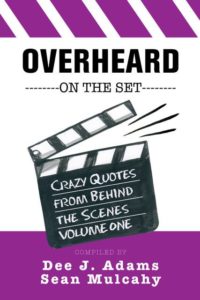 “Hilarious, bawdy and so terribly true. Overheard on the set is an accurate and savagely funny record of how people in show biz really speak.”
– Entertainer, Comedian and Smartest Man in the World – Greg Proops

We warn you. Sometimes it isn’t pretty. And sometimes it’s so funny you can’t help but laugh.

Overheard on the Set. You won’t believe your ears.